Lessons learned from common carrier lockers systems in Seattle (US)

As more delivery vehicles come into our city streets cities are looking for solutions to reduce freight-related congestion and improve the use of commercial load/unload zones. Among the possible solutions are common carrier locker systems (CCLS). The concept behind CCLS is to create the density that will allow carriers to leave parcels in one single secure, accessible area in a building.

The Urban Freight Lab (UFL), a project of the University of Washington’s Supply Chain Transportation & Logistics Center, will pilot test innovations that could reduce congestion caused by urban freight vehicles and make commercial load/unload zones more productive. One of these innovations is placing common carrier locker systems near commercial load/unload zones and transit stops. Today, companies like Amazon and UPS have their own branded parcel locker systems.

With a locker system, deliverer and recipient do not need to be at the same place at the same time, thereby reducing the number of failed deliveries (and repeat trips). Because the driver can leave all parcels in one place rather than having to go “floor to floor, door to door,” time spent inside buildings decreases, thereby boosting turnover at the load/unload zone at the building.

This Spring UFL piloted a CCLS at the Seattle Municipal Tower. The pilot found that the lockers reduced the time truck drivers spent in the tower by 78 percent, from 27 minutes down to 5.6 minutes, and reduced failed deliveries to zero.

According to Alexander Laska of ENO Transportation Weekly UFL is planning a longer pilot at the Tower to collect data on seasonal usage patterns, recruit more participants, and site lockers next to the commercial load/unload zone to further reduce delivery time. They also recommend these programs ensure enough space for expansion (more participants will, of course, require more locker space), establish a time limit for keeping packages in the lockers before they are returned to sender and integrate the locker system into carriers’ logistics platforms. UFL has identified five potential sites at three Link light rail stations to place CCLS so that people can pick up their packages on their way home. 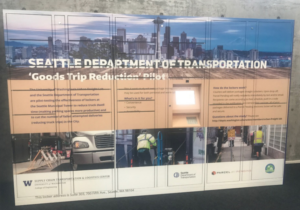 The UFL study also identified limitations. Some failed deliveries were packages sent to the wrong address, which a locker would not solve. About 60 percent of the parcels delivered after the lockers were installed were oversized, so many of them did not fit in the locker.
Moreover, 82 percent of the trucks in the Tower loading bay over data collection period were not there for parcel pick-ups or deliveries, but rather for construction, furniture delivery, and repair services. They parked longer at the commercial load/unload zones, than parcel delivery trucks.
UFL found that advance marketing and communication is needed, both to make potential participants aware of the new delivery options and also to ensure they participate in the right way.

You can find the full report here.