The municipality of Amsterdam (NL) stipulated that all boats would have to switch from diesel to electric power by 2025, in an effort to reduce pollution and greenhouse gas emissions. For boat companies this a huge a huge, and expensive, challenge.

Reederij Kooij has converted six boats so far. it takes about three months to strip out the old diesel engine and install the electric engine and batteries. A typical tourist boat needs about 66 batteries, he says, making the conversion cost around 165,000 to 250,000 euros per boat. 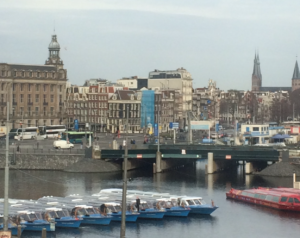 But the engines are quieter, cleaner and cheaper to run. They can be recharged in about 10 hours and last about two days between charges, says Sigrid Hanekamp, an application engineer from Dutch battery company Lithium Werks, which supplied the batteries for Reederij Kooij’s boats. Arjan Kooijman, director of E-Ship, a firm that converts diesel boats to electric, says connected sensors on the batteries are constantly sending performance data back to the boat company’s headquarters. Another challenge the boat companies face is installing enough dockside charging stations.