Beer brewer Heineken will supply cafes in Amsterdam’s city center with the world’s first electrically powered tank beer truck. “Heineken has a strong green ambition and in this, we look at the whole chain. This includes clean transport. I am pleased that we can now transport a large weight such as tank beer sustainably,” says Heineken managing director Hans Böhm.

It is not only about emissions. The new electric truck is quiet. Hans Böhm: “This new method of transportation benefits the quality of life for everyone who lives, works or visits the inner city. An additional advantage is that this leap forward means you can enjoy a beer on a terrace, for example, even better. I’d rather hear smiling people and beautiful music than a roaring engine that also stinks and chokes.”

August 2020 it was announced that all Heineken beer for the Dutch market is brewed 100% green. The fact that sustainability in transport is now being added to that is a great milestone and a prelude to more clean kilometers.

Initiating electric transport is not without its struggles. While it is already fairly commonplace in passenger transport, it is still difficult to find sufficient traction in the goods segment. This development is in full swing. That does not alter the fact that the weight of the load still has to be distributed over several vehicles and journeys.

From the brewery in Den Bosch (NL), a large truck carrying 200 hectoliters of fresh beer drives to the edge of the city. There, 30 hectoliters will be pumped to the smaller and 100% electric tank beer truck that will supply approximately five cafes with fresh Heineken, Amstel, or Brand beer, quietly and with zero emissions. Once empty, the truck will refuel at the edge of the city to continue its journey to the historic heart of the city. The new trucks are much lighter than their predecessors and meet the standard of up to 7.5 tons to protect quays and bridges. 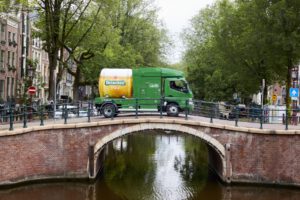 In the first phase, two electric tank beer trucks will operate in Amsterdam. Heineken plans to make its urban distribution fleet cleaner and quieter in the coming years.

Because electric tank beer transport is new, it was initially a bit of a puzzle for Heineken to find out what the rules were. Before Heineken can invest in electric beer transport, it must be clear what the do’s and don’ts are in the city center. At what times can they actually be driven? Because going back and forth more often to refuel electricity and beer also means different driving times. What about the infrastructure for charging stations and parking facilities?

Thanks to the efforts of alderman Egbert de Vries, the City of Amsterdam and Heineken have found each other completely in the joint ambition to get the city cleaner and quieter. “Supply is crucial to the city, but to keep Amsterdam liveable and accessible, trucks must become cleaner, lighter, safer, and smarter. To achieve these goals, together with the sector we recently launched the Platform Logistiek020. With this platform, we are looking together with companies such as Heineken at the future of supplying the city. The launch of the electric tank beer truck is a good example of how companies can make an important contribution to the liveable city that we can only achieve together,” says alderman De Vries.

With Heineken’s move, their large tanker beer trucks will disappear from the city center for good. Apart from the emissions in the city, safety, and weight, with the new truck and the mobile city hub Heineken reduces CO2 emissions by over 40% in transport from the brewery in Den Bosch.