The distribution network of Amazon and the footprint of freight digitalization

The emergence of e-commerce is associated with a rapid shift in the commercial footprint towards distributional-based consumption. Through the analysis of the geographical expansion, market coverage, and functional specialization of Amazon’s distribution network, research by Jean-Paul Rodrigue underlines that digitalization has a pronounced impact on distribution networks.

E-commerce is favoring a transition from the conventional retail freight landscape towards a new physicality of freight distributions involving purpose-designed facilities, modes, and channels. The case of Amazon underlines a consistent locational behavior to achieve a distributional hierarchy of facilities granting logistical access to consumer markets. The distributional hierarchy is organized in three stages; procurement and fulfillment, distribution, and last-mile. 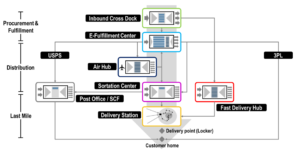 Amazon is illustrative of a retailer using e-commerce to penetrate a wide range of customer segments. To support the requirement of distribution-based consumption, a hierarchy of specialized distribution facilities has emerged, each with its own locational, operational, and physical characteristics. It includes three stages: procurement and fulfillment, distribution, and last-mile deliveries.

A look at the footprint of Amazon’s facilities underlined that their function is size-related, from large suburban e-fulfillment centers (of about 850,000 square feet) to small-sized fast delivery hubs and delivery stations usually located in central areas (of about 50,000 to 90,000 square feet). Medium-sized facilities (about 300,000 square feet), mainly sortation centers, tend to be located in intermediate locations. The location of each facility represents a trade-off between economies of scale, operational requirements, market areas, land use density, lead time, and land cost.
The goal of Amazon is to achieve a distributional hierarchy of facilities to access consumer markets. The inbound cross-docking facility and the e-fulfillment center are the backbones of the fulfillment process, accounting for the most significant footprint. The sortation center, a medium-sized facility, is the core of the distribution process, allowing to route deliveries within metropolitan areas and for Amazon the option to interface with local post offices. It reconciles the apparent contradictions between the need to service high market density in central areas from low-density peripheral locations. The last-mile layer either focuses on fast delivery facilities such as Amazon Prime, or delivery stations where parcels are assigned on delivery routes. Co-location of facilities is common. This involves two separate distribution functions within the same facility.

The functional specialization of e-fulfillment centers is prevalent, mainly along the lines of if the parcel is sortable or non-sortable. The nature of the item is secondary, while how it can be distributed is primary. If the parcel is sortable, it can be sent through regular parcel delivery services, while a non-storable parcel requires a different distribution channel because of bulk and weight considerations. An emerging functional specialization of delivery stations between regular parcels and heavy deliveries is emerging.

Through horizontal integration, Amazon used logistical facilities to expand market coverage and lower lead time, realizing economies of density on which relied the prior expansion of major retail chains such as Walmart and Target. Through vertical integration, Amazon used logistical facilities to control distribution flows and channels, allowing to control how the parcels are routed within its distribution and last-mile facilities, including final deliveries to consumers. The locational behavior of facilities seeks to maximize regional market accessibility.

The rapid growth of e-commerce has opened new research opportunities:

Source: Jean-Paul Rodrigue, The distribution network of Amazon and the footprint of freight digitalization in Journal of Transport Geography 88:102825