The Amsterdam City Doughnut takes the global concept of the Doughnut, developed by Kate Raworth, and turns it into a tool for transformative action in the city of Amsterdam. It marks the first presentation of the holistic approach to ‘downscaling the Doughnut’, combining local aspiration with global responsibility. How can our city be a thriving home to thriving people, while respecting the planetary boundaries?

Amsterdam already has ambitious environmental goals, including a plan to become carbon neutral, and to transition to a circular economy, meaning that all materials will be used in closed loops instead of ending up in landfills. But it also recognized that it needed an overarching strategy that included social goals. The planning has been underway for more than a year; the city formally adopted the model last week.

The Amsterdam City Doughnut has been developed in collaboration between Doughnut Economics Action Lab (DEAL), Circle Economy, Biomimicry 3.8, and C40 over the course of one year. It is at the core of the City of Amsterdam’s broader ambitions for becoming a circular city, the Amsterdam Circular Strategy 2020-2025. 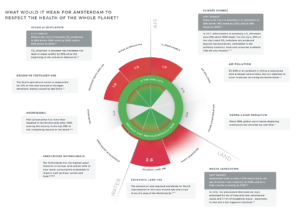