Municipal co-distribution of goods in Sweden

Municipal co-distribution of goods has been tried in several Swedish municipalities. The co-distribution project Upphandling Södertörn was initiated in 2014 and includes eight municipalities with a total population of about 500.000. The evaluation was presented during the Climate Friendly City Logistics in the Nordics conference.

Between the years of 2014 and 2017, fossil carbon dioxide emissions associated with the distribution of goods (municipal and private) in the municipalities decreased by 73 percent, which is mainly due to increased use of bio-based fuels. Corresponding driving distance has been reduced by four percent. The effect on carbon dioxide emissions and driving distance related to only the municipal goods has not been possible to distinguish from the total effect. However, the number of deliveries to the municipal service units has been cut by half compared to before implementation of co-distribution, based on data from three municipalities. The pre-study that was conducted prior to project start showed larger effects in reduced driving distance and one reason for this is that the pre-study did not consider the fact that the large full-range suppliers were co-distributing their goods to a large extent even before the municipal co-distribution project was implemented.

Emissions of nitrogen oxides and particles within the municipalities have also decreased by about 70 percent. The effect on local air quality is however negligible since the emission reductions by any means are small compared to emissions from other traffic. The reduced emissions of air pollutants from the distribution of goods within the municipalities are mainly due to increased use of Euro VI trucks.

The socio-economic benefits of the co-distribution project are currently small compared to the increased costs that the project has brought. The cost of the service provider that carries out the distribution traffic dominates the costs but also the administrative costs of the municipalities related to the co-distribution project are substantial. These costs can partly be assigned to the introduction phase, which is still ongoing, why these costs are expected to decrease as the project is going into its administrative and development phase in the fall of 2017.
Of the environmental benefits that have been quantified, the reduced climate impact is the largest. A discount on goods is identified as a substantial future cost savings for the municipalities as the end transport of the goods should be separated from the price of the actual goods. 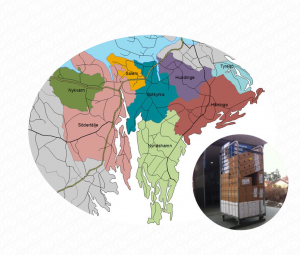 The effect on the working environment could not be determined based on the interviews that were carried out within the evaluation. However, it is evident that employees within the different municipalities perceive the co-distribution project differently. Similar to other studies on co-distribution of goods, communication, both internal and between the carrier that carries out the distribution and the suppliers, has been identified as key to a well-functioning system.

During the conference, Olof Bohlin presented some thoughts about future developments. One topic is to make the operations ‘As easy as e-commerce at home: sustainable and compliant’ by further digitalization of the processes and optimizing the customer journey. Other issues are: improving master data, visualize available stock and delivery status, increasing efficiency and sustainability, off-peak deliveries, use of micro-hub and zero-emission vehicles.