Inner cities and residential areas are becoming increasingly congested. Urban logistics must be made cleaner, quieter, safer and preferably unseen. A lot of gains could still be made in respect of traffic to building sites, the catering industry and consumers, and waste flows from cities. But the regulations for transport on own account stand in the way of sharing capacities and consolidation. Why is there no level playing field for one’s transport on own account and road haulage?

At the same time, an increase in the number of ‘nano stores‘, convenience stores in the neighbourhood, has led to more targeted and frequent deliveries. Take me for example, I have five convenience food stores within 500 metres of my home, and two big supermarkets, and, what’s more, the same retailer drives past my door several times a day. It all has to be fresh, fast and in full. It will be just a matter of time before the first neighbourhood shops for building materials appear, and they will also immediately serve as click-and-collect points. 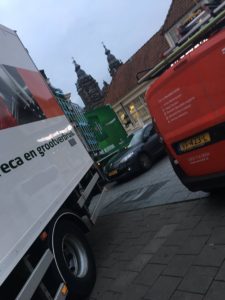 The catering industry wants to serve fresh products every day to restaurant in town. Contractors want to work unhindered… The pressure is on!

In the old days, you could drive into the city with full trucks. But with increasingly smaller and more frequent deliveries, this is no longer possible. And on top of that, local authorities impose all kinds of annoying rules and environmental zones.

Companies with transport on own account are rightly concerned about urban distribution. Cleaner, quieter, safer and smaller vehicles are the new standard in cities. These vehicles are linked with their on-board computers to local traffic control centres to avoid traffic jams, roadworks and schools. Lorries are friendly guests in the city.

Big investments will shortly be needed to satisfy the requirements of local authorities. Of course, shippers would like to share the costs of these investments with colleagues. Or, shippers would like to bundle transport flows to the same delivery address with other carriers, which also immediately means you can provide a better service to customers. Shippers with transport on own account are fully able to consult directly with their customers about more intelligent delivery. That immediately results in a win-win situation.

However, the rules for transport on own account stand in the way of cooperation between shippers. You cannot transport each other’s loads just like that. Is contracting out one’s transport in cities the only option then? If so, it will be a very long time before we get our urban logistics in order.