In cities everywhere, people on bikes are clamoring for more space on the roads. Towns in the Netherlands have gone further than almost anywhere else in securing that space. But, the past month has shown that even the Dutch might be struggling to keep up with the demand for bike lanes. Citylab reports about it.

Right now, the media in Amsterdam is bemoaning the volume of cargo bikes on the Amsterdam’s bike paths. So great is the city’s volume of bike-born goods, newspaper Het Parool claimed, that cycle lanes are filling up, and hefty cargo trailers make it impossible for other cyclists to overtake them.
With a new company called Just Cargo joining Amsterdam’s roster of bike couriers in May, the bike lanes could become even more over-burdened, possibly encouraging clients to turn back to van delivery to ensure their deliveries arrive on time. 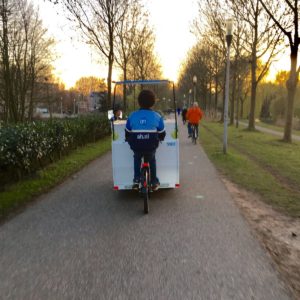 Citylab editor Feargus O’Sullivan: “Even when you take into account the smaller spaces within which bikes can maneuver, these ratios seem skewed. There’s no reason why Amsterdam couldn’t follow the lead of DHL in Utrecht and see the lion’s share of its deliveries handed over to bike couriers. But for that to work in the long run, the city’s cars may have to squeeze over and give them some more room”.