After Tesla Motors founder Elon Musk’s announced plans to build subterranean tunnels for freight, the Chinese e-commerce giant JD.com said that it is working on a similar plan for underground, urban parcel delivery.

Urban freight vehicles have an outsized contribution to urban traffic emissions, and can take up as much as a third of road capacity. With urbanization in China causing intense changes to the environment, creating pollution and causing other disruption to people’s lives, the primary goal of the institute is to design the framework for logistics in urban spaces to be more efficient and environmentally friendly.

Freight vehicles create traffic emissions and can take up as much as a third of road capacity, according to JD.com. China’s rapid urbanization will only increase those effects, causing rapid changes to the environment, creating pollution, and disrupting people’s lives, JD said.

The institute will look first at underground logistics systems, making use of subterranean tracks and integrated municipal pipe corridors. This can help preserve open, convenient and aesthetically pleasing aboveground space that would otherwise be occupied by traditional logistics systems, ensuring smooth and efficient urban logistics with minimal disruption to daily life.

If JD.com can succeed in building an underground delivery network, it says the system could allow urban logistics operations to be more efficient and environmentally friendly, while preserving aesthetically pleasing aboveground space that would otherwise be occupied by traditional logistics systems.

“The most effective smart cities are the ones that make the best use of all available space and resources,” the director of the Chinese Academy of Engineering, Chen Xiangsheng said. “The use of underground space to build three-dimensional smart logistics system is an industry game-changer. It will alleviate traffic problems, environmental problems, and save urban space.”

JD.com is the only large-scale e-commerce company in the world to operate a nationwide in-house logistics network that can deliver to customers’ doorsteps. JD operates unmanned convenience stores,  autonomous delivery robots, a fully automated warehouse and is the first e-commerce company to commercially launch drone deliveries. As a leader in smart logistics and automation, the company believes there are many potential benefits to be explored in new propulsion technologies, which promise higher speed, faster acceleration, and lower energy usage, at lower operating costs. 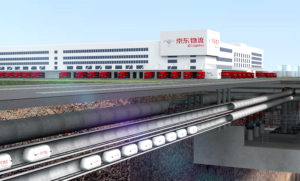 “As China’s cities are developing faster and becoming more sophisticated, sustainable urban development is critical. Smart logistics ensures that space in cities is being used in the most efficient and least disruptive way possible,” said Zhenhui Wang, CEO of JD Logistics. “We are committed to revolutionizing global commerce, and society more broadly, and it is an honor for us to join together with other leading ecosystem players to establish the Urban Smart Logistics Institute.”