How to develop a commercial shared street?

Many narrow or crowded downtown streets operate informally as shared streets during rush hour or at lunchtime, but are not regulated as such. A commercial shared street environment should be considered in places where pedestrian activity is high and vehicle volumes are either low or discouraged. Commercial shared streets can be designed for narrow or wide cross sections, but become increasingly complex and difficult to maintain as a shared space as width increases.

From 1960–1980, many neighborhood main streets and downtown retail corridors were converted to pedestrian-only usage. In an era of declining downtown retail revenues due to competition from shopping center developments outside of historic cores and on line commerce, many of these conversions were unsuccessful or suffered from poor maintenance and a lack of programming or policing. 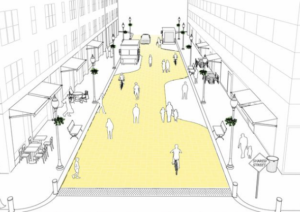 Commercial shared streets differ from this earlier generation of pedestrian malls in both their regulation and implementation. Shared streets maintain access for vehicles operating at low speeds and are designed to permit easy loading and unloading for trucks at designated hours. they are designed to implicitly slow traffic speeds using pedestrian volumes, design, and other cues to slow or divert traffic.

For European research on this topic, check out:
The complexity of planning for goods delivery in a shared urban space – a case study involving cyclists and trucks.