Is noise pollution the next big public health crisis?

Research shows that loud sound can have a significant impact on human health, as well as doing devastating damage to ecosystems, David Owen writes in the New Yorker: “Scientists still don’t know everything there is to know about the effects of sound on living things, but they know a lot, and for a long time they’ve also known how to make the world substantially less noisy”.

Bruitparif, a nonprofit organization that monitors environmental-noise levels in metropolitan Paris, published a report that combined medical projections from the WHO with “noise maps” based on data from its own network of acoustic sensors. Bruitparif concluded that an average resident of any of the loudest parts of the Île-de-France—which includes Paris and its surrounding suburbs loses more than three healthy life-years, in the course of a lifetime, to some combination of ailments caused or exacerbated by the din of cars, trucks, airplanes, and trains. In Western Europe, the guidelines say, traffic noise results in an annual loss of at least one million healthy years of life.

David Owen visited the headquarters of the noise-monitoring project at N.Y.U.’s Center for Urban Science and Progress. That project is called Sounds of New York City (sonyc) and is funded mainly by the National Science Foundation. Sonyc’s purpose, Mark Cartwright, one of the scientists on the project, told David, is “to monitor, analyze, and mitigate noise pollution.” The researchers are developing algorithms that they hope will eventually be able to identify a full range of noise sources by themselves as an example of ‘machine listening’. 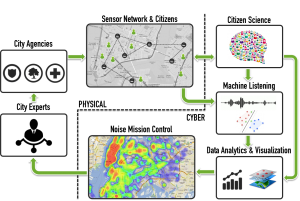