What is the potential for bicycle crowdshipping? Price of services is still a major issue

Wicaksono, Satrio (TU Delft Civil Engineering and Geosciences; TU Delft Transport and Planning) explored the potential for bicycle crowdshipping. This would be a potential alternative for future urban parcel deliveries. Understanding the supply and demand characteristics is essential for bicycle crowdshipping platforms to sustain its network of customers and couriers.
The case study using cyclists in Delft as sample discovered market share of 14-26% if at least 0.5% of the cyclists would register themselves as an occasional courier. The study revealed that along with the increased membership rate in bicycle crowdshipping platform, the price will go down and the market share would increase.

The main challenge in the crowdshipping realm is to maintain a sustainable network of customers (demand) and couriers (supply). To help to resolve the challenge, this research offers a comprehensive approach to examine the market potential of bicycle crowdshipping through concurrent evaluation of its supply and demand side, which thus far has been absent from the literature. By deploying discrete choice models, the study generated supply, demand, and market equilibrium model to aid crowdshipping platform in understanding influential service attributes and its effect on the market penetration level. The research concluded adjustable delivery time window as a key differentiating attribute to entice customer preference towards crowdshipping.

Bicycle crowdshipping emerged as a solution for urban parcel deliveries. The term crowdshipping itself means utilizing the existing capacity of travelers in the transport network to also carry goods along with their journey. Crowdshipping is highly potential for e-commerce delivery as it deals with the package in an individual way and offers flexible delivery condition. In the Netherlands, 2.8 million cycling trips are made daily, and this would become a ground to develop a network of crowdsourced bike couriers. 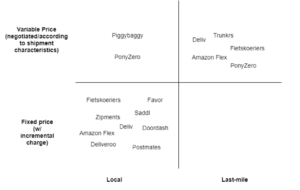 Satrio scored a very high grade, a nine (9), for his research report, presentation and defense. The report is a very valuable report on local-for-local last mile deliveries from both a supply and demand perspective.

Read more about the study here.