Factor 6: Higher CO2 productivity in the transport sector? Only by working together

In recent years the transport sector has booked tremendous gains in terms of improving air quality. Unfortunately, its CO2 emissions have increased over the past 30 years, despite the major advances that other sectors have made in that area. During the 2016 National Climate Change Conference, various companies, levels of government and civil society organisations in the Netherlands agreed on measures to reduce CO2 emissions in line with the Paris Agreement.

According to Connekt, an independent network for smart, sustainable and social mobility, the transport sector needs to improve its CO2 productivity by a factor of 6 by 2050 (compared to 1990 levels). The Netherlands Organisation for Applied Scientific Research TNO and independent research and consultancy organisation CE Delft have calculated the sources of the CO2 emissions from the transport of goods in the Netherlands. 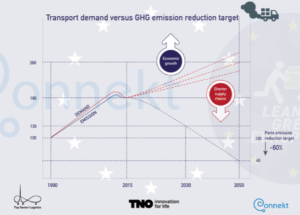 The established measures will not result in a factor 6 improvement. Together with their shippers, transport companies need to work much harder and more quickly not only to implement clean transport technology and smarter logistics concepts for meeting customer demands, but also to share transport and traffic data and to take advantage of government stimulus policies.

Hard figures about transport flows form the basis for a successful approach. Where are the empty kilometers, where is intermodal transport better and who would benefit most from bundling? In fact we know too little about such figures. So how can you set the right priorities?

For example, in Amsterdam’s Oude Pijp, an increasingly crowded neighborhood of 800 by 800 meters and 15,000 inhabitants, no fewer than 1,000 carrier vehicles make deliveries each day. A shocking conclusion from a recent study was that 800 of those vehicles drive into that neighborhood to make just one delivery, and in by far the most cases it concerned transport on own account. That is hardly sustainable.

Higher CO2 productivity can be achieved through technology: light electric vehicles for city logistics, platooning and zero-emission trucks and barges. But that is not going to be enough.

Shippers and carriers will need to share their multimodal capacities and use them jointly in a much smarter way: transporting larger loads with fewer vehicles. The logistics sector needs to focus on innovative services to curtail transport on own account in cities. That is precisely where the problem lies.

Such collaboration is progressing too slowly. If transport companies themselves don’t take the initiative to work together, parties such as Uber and Trunkrs and online marketplaces such as Synple and Quicargo will do it for them.  Or worse yet, the government will force them to do so by implementing delivery time windows, road pricing and low-emission zones. And then you’re no longer in control.

The Factor 6 plan is about arranging transport in a smarter way, especially with the customers at the receiving end. That is still something that only people can do. That’s why, to start with, there needs to be social innovation at the level of strategic management: are the entrepreneurs in the sector ready to really work together? Are we capable of making different agreements with the receivers? It’s not only a matter of hardware and software, but also of mindware. And then there will need to be social innovation among planners, purchasers, salespeople and, last but not least, among the drivers behind the wheel.