Dutch PostNL to go light and electric in city logistics

PostNL is replacing 20 car trips with diesel delivery vans in Utrecht (NL) every day through more sustainable delivery with electric cargo bikes and light electric vehicles. PostNL previously did this in Amsterdam (NL). PostNL delivers business mail and empties more than 150 letter boxes in the city. In the evening a part of the parcels is also delivered with the electric tricycle. PostNL wants to contribute to a clean inner city and to improve accessibility. 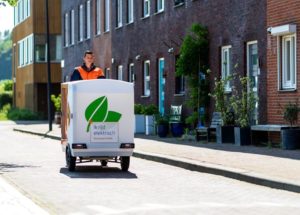 Daily 560 green delivery kilometers in Utrecht
PostNL opts for the electric tricycle because they wants to make its city logistics greener. The electric tricycle is zero emission and is often faster than the delivery van in busy city centers. By using electric delivery bicycles, PostNL replaces 20 car trips every day. This means 560 emission-free delivery kilometers per day and a reduction of approximately 35,000 kg CO² emissions per year. A special cargo bik hub has been realized in the inner city of Utrecht, from where it is delivered.

Clean delivery in inner cities
Mail deliverers have been delivering their mail on foot or by bike for years. When emptying the mailboxes and collecting and delivering large numbers of business mail, PostNL starts delivery vans. In 2016, the center of Amsterdam tested to replace these delivery vans by electric cargo bikes and small electric vehicles (Stints).

In 2017 PostNL started delivering 60 electric delivery bikes. This means that 100 car trips are replaced every day in the capital. In the city center of Leeuwarden, PostNL delivers both mail and parcels entirely emission-free with electric cars and small electric vehicles.

After Utrecht and Leeuwarden and Amsterdam, PostNL wants to deploy electric cargo bikes in about ten other Dutch cities in 2018. Parcels are also increasingly being delivered with green gas and electric cars. As a large logistics e-commerce company, PostNL has the ambition in 2025 to deliver zero emission in 25 city centers. For this PostNL signed the Green Deal Zero Emission City Logistics together with various authorities and other companies.