So far, city logistics has played a limited role in improving air quality in cities. The focus on clean vehicles has been positive for air quality. But shouldn’t we really be talking about economically sound, vital and healthy city centers and neighborhoods when developing urban freight policies? Today, “zero impact” city logistics should be the focal point.

Air quality in cities is unhealthy. The air in cities contains many different substances, both particulate matter and gases. Among other things, the particles released during combustion in diesel engines are a threat to our health. That is why our air quality is subject to European standards.

Amsterdam’s coughing corridors
The concentrations of particulate matter and nitrogen dioxide regularly exceed those standards. Friends of the Earth has labeled my street in Amsterdam a “coughing corridor”. But the situation in Rotterdam and in many other European cities like Paris and London is just as bad. And even where the European standards are met, the air is hardly healthy. Both friends and foes can agree on that.

The role of city logistics in improving air quality
In the Amsterdam metropolitan region, 35% of nitrogen-dioxide emissions and 10% of the particulate matter come from road traffic. The transport of goods is responsible for 20 to 25% of that. It’s safe to say that city logistics has already made a significant contribution towards cleaner air in the cities. The heavier Euro 5 and Euro 6 trucks that are still allowed to enter the low-emission zones of cities are reasonably clean. Now, it’s cleaner carrier freezing and refrigeration that needs attention.

Considering their 80% share in city logistics, it’s high time that delivery vans were made cleaner. Creating more restrictive low-emission zones would certainly speed up the process of making nearly a million delivery vans in the Netherlands cleaner. A number of Dutch cities have even opted for zero emission city logistics in 2025. And, the transport industry is actually supporting it.

In 5 years from now, air quality might no longer be an issue in city logistics! Shouldn’t we then just forget that persistent air-quality mantra in connection with city logistics? What were the means and the ends of all those city logistics measures once again? Shouldn’t it really be about ensuring economically sound, vital and healthy city centers and neighborhoods? Isn’t accelerating climate change not much more urgent? 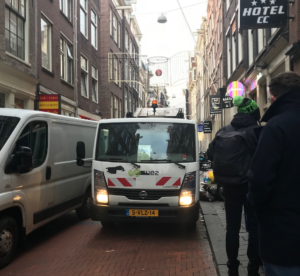 CO2 and noise
The attention given to city logistics in the coming years needs to focus on the other aspects of “zero-emission” city logistics: CO2. The transport sector needs to increase its carbon productivity by a factor of 6 to meet the Paris Climate goals. Even with just one-third of the current CO2 emissions in transport in specifically city logistics here is still much to be gained.

Smarter and less: zero impact
After all, city logistics is about much more than just clean, zero emission transport. The focus should be on smart but especially also less transport: less – and a more flexible – use of public spaces for loading and unloading, more traffic safety, smaller vehicles, a better traffic flow, less noise, no damage to building and infrastructure, privileges as a reward for effective city logistics, the smart provisioning of (new) residential areas and bottom-line no nuisance.
The time has come for not just “zero emission” city logistics, but for “zero-impact” city logistics.