Parcel deliveries: can we cut the number of vehicles by half?

The delivery of packages ordered online can be made much more sustainable: “Unnecessarily large vehicles are essentially transporting air,” says Walther Ploos van Amstel, professor of city logistics at Amsterdam University of Applied Sciences, on Twinkle. The way he sees it, there are twice as many delivery vans driving around in the city as necessary.

It’s one thing to have smart transport vehicles, but you are also going to need dynamic planning. That’s what we need to keep steering towards. The delivery of parcels involves an average of 40 to 50% slack time.

Walther Ploos van Amstel on Twinkle: “Travel time in the city remains a very uncertain factor. Consider that drivers spend 65% of their time standing beside their vehicle rather than sitting inside it. That is something that never gets taken into consideration when plans are made in advance.” Another challenge for city logistics is the time drivers spend searching for a loading and unloading zone. “A dynamic use of traffic data would allow drivers to reserve such a space, among other other benefits.”

Although the Dutch logistics sector is already well on its way to becoming more sustainable, there are still quite a few hurdles to be taken, says Ploos van Amstel. “Parcel-delivery companies are making serious efforts when it comes to electric transportation. You can see that particularly with companies like DHL, Fietskoeriers.nl and Bubble Post.”

Nevertheless, there are two factors that significantly disrupt their pursuit of sustainability. “The first is the number of consumers who are not at home during the initial delivery: that’s an average of one out of four. It concerns hard figures, the result of various studies, yet the sector has yet to acknowledge them. Combining a delivery with the pick-up of a return shipment could eliminate an extra trip: PostNL and DHL are already doing that with the help of address intelligence on the basis big data.

“Another thing is that packages are generally much to big, which means delivery vans are essentially transporting air. Fortunately, companies are more and more apt to be taking appropriate measures: they are customizing their packaging for products. One example is the collaboration between Picnic and Heineken for the KwartKrat (a six-pack of bottled beer). That is good example of ‘e-commerce ready packaging’.” 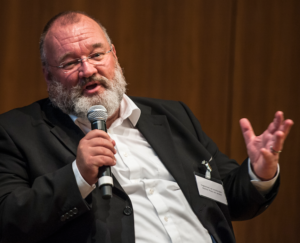 The behavior of delivery drivers doesn’t always reflect well on the logistics companies that employ them. There is definitely room for improvement in that regard, thinks Ploos van Amstel. “Particularly in the home-delivery market, the folks you see on scooters are likely to be real cowboys. You often hear stories about them drinking beer in the street and about how appalling their traffic safety is. A delivery van is four times more likely to be involved in an accident than a passenger car, even though they travel fewer kilometers.” Safety is becoming a more important theme in connection with sustainability.

Measures running up to 2025

Making residential areas more accessible for the growing delivery economy will require changing not only the way those are set up, but also the size of the vehicles that enter there. “Residential areas that are currently under development should be designed with the parcel-delivery culture in mind, for example by including pick-up points where consumers can go to pick up their own packages. Delivering those parcels by means of light electric vehicles such as the Dutch PostNL’s Stints and DHL’s cargo bikes will make residential districts more accessible. Soon we will even see self-driving vehicles carrying the delivery person along with all the parcels.”

Another instrument for promoting sustainability is time-slot scheduling. “Dutch grocery giant Albert Heijn, for one, allows customers to choose from among some 60 delivery time slots per week, each one with a different price tag: the more sustainable time slots are less expensive. Nespresso was the first to apply that principle a few years ago, also as a way to reduce the pressure felt by its employees. That theme is now quite topical again in connection with the pressure that online shopping – and the expectations regarding next-day delivery that go along with that – places on the night workers who are required for that. Nespresso customers were apt to place their orders in the weekend, which meant that 40% of an entire week’s volume had to be processed on Mondays. And on Tuesdays, when the packages had to be delivered, the consumers tended not to be home.

“I think the notion of a ‘no hurry’ order button, as Dutch lawyer Margreet de Boer recently suggested on Twitter, would be a very smart solution for that problem. But the idea of offering price reductions for more sustainable delivery time slots also fits in nicely in that respect.”

Fortunately, there are plenty of e-commerce companies and parcel-delivery companies that “really are doing their best,” according to Ploos van Amstel. “In essence, the parcel sector is already the most sustainable component of the transport sector as a whole. But a number of measures will certainly need to be taken before 2025, both in terms of new technologies and the way in which consumers use them.

“And that is by no means limited to the transport sector. The number of warehouses in the Netherlands is growing steadily. A lot of the processes there are being mechanized, and after efficiency, sustainability is the second most important criterion in their design. The e-commerce sector is a frontrunner in that respect. It is an innovative branch with a youthful business culture where people are less apt to think along traditional lines. Projects in the area of robotization show, for example, that everyone is willing to experiment.”