Will smart ICT solve the problems around the loading and unloading of goods?

Trucks and delivery vans driving around in circles looking for a place to park, and then double parking when they can’t find one – it’s something you see in every city. It’s inefficient and it’s a nuisance, both to the drivers themselves and to the local residents. Last year, a team of traffic experts from Defect, Trajan and the Amsterdam University of Applied Sciences (AUAS) carried out a number of studies on the practice of loading and unloading of goods in shopping streets in Amsterdam. They counted the number of loading and unloading moments over the course of a single day. What did they conclude?
Parked in the middle of the street
In some locations there were no places for trucks to load and unload their goods. In such cases, 74% of the deliveries took place in the middle of the street, and 24% took place on the sidewalk, forcing pedestrians, bicyclists and people in cars to wait or take an alternative route. Only 30% of the deliveries were made without causing any inconvenience to other people using the street. A car driving into one of the observed streets at any given moment on the day the measurements were taken had a 53% chance of having to wait for a truck to finish loading or unloading goods in the middle of the street. 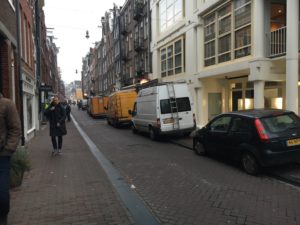 Another explanation is that some drivers are just lazy. Unwilling to walk a little farther to deliver their goods, they simply stop in the middle of the street in front of their delivery address. And the risk they run of getting fined for doing that is neglible. The fact that in some cases over 100 other people are inconvenienced when a delivery truck is parked half in the street and half in a loading and unloading zone doesn’t help to improve the reputation of lazy truck drivers.

Innovations
Without transport, everything would come to a standstill. Transport ensures that you can have fresh fish for lunch and find the most recent titles at the bookstore. The question is: are all those delivery trucks and vans really necessary? In De Pijp, a bustling district on Amsterdam’s south side, the vast majority of delivery vehicles enter the area with just one delivery destination, and in most cases those are B2B deliveries. By working together and bundling shipments, companies could easily cut the number of delivery vehicles entering De Pijp in half. There are also opportunities for using cargo tricycles and light electric vehicles there.
With fewer and smaller delivery vehicles, there will be fewer problems due to loading and unloading. There need to be enough loading and unloading zones as well, and those need to be located in the right position in the street.
Finally, there is also a mismatch between supply and demand. Drivers are not always able to find loading and unloading zones, and if they do, those zones are often occupied by vehicles that shouldn’t be there.
Smart ICT
Two projects in Amsterdam are currently attempting to solve this problem by using smart information systems and bringing about changes in behaviour. To deal with the problems arising from the loading and unloading of goods, the Amsterdam University of Applied Sciences (AUAS) and Technolution are carrying out a pilot study involving reserved parking spaces for delivery vans. The participating vans can drive directly to a parking space reserved for them and won’t have to load and unload their goods in the middle of the street.
A sensor detects whether a loading and unloading zone is occupied or free and can assign the space to the driver. A following step will be digital enforcement (also for special permits). With a view to future environmental measures this could mean, for example, that carriers would only be allowed into the city if they have a reservation for a loading and unloading zone. Without a reservation, they would have to stay on the beltway. Barcelona in Spain and Vienna in Austria also have projects with digital enforcement. By getting more data about the actual use of loading and unloading zones local government can decide on a more flexible use of these zones according to day of the week or time of the day.

Rerouting in real time
A second project, known as ITSLOG, focuses on city logistics in Amsterdam. The emphasis lies on the delivery of supplies to supermarkets, convenience stores and consumers. The research is being carried out by the Amsterdam University of Applied Sciences (AUAS) and its knowledge partners Delft University of Technology and the Netherlands Research Institute for Mathematics and Computer Science (CWI). Other project partners include companies such as food-retailer Ahold Delhaize, Peter Appel Transport and logistics traffic analysts Simacan. They are seeing to the practical side of ITSLOG.

In the coming years researchers will look at whether the available loading and unloading capacity can be related to a truck’s current coordinates and its expected arrival time at the loading and unloading zone, the store, or the consumer’s address. That information, together with current traffic data, can be used to generate a uniform rerouting and buffering instructions that can be processed by on-board computer systems and communicated to the drivers.
The researchers will analyse the effects of the real-time rerouting and buffering of trucks on the basis of current traffic information and the availability of loading and unloading locations. With these solutions, the logistics sector will be able to work more efficiently and save costs at the same time. What is more, it will help relieve parking pressure and reduce traffic congestion. It is expected that trucks will be driving fewer kilometres, which means there will be fewer CO2 emissions and less inconvenience. The functionality is of great value for improving accessibility and the free flow of freight traffic on highways and within cities.