The effects of the warming that has already occurred as a consequence of anthropogenic emissions of carbon dioxide and other greenhouse gases are dire enough. Scientists warn that we must steeply reduce greenhouse gas emissions by mid-century to avoid additional warming that will have genuinely catastrophic effects. In that light, transforming the technologies and systems that move people and goods around the world appears imperative.

Greenhouse gas emissions do not even fully describe the environmental challenges posed by the rising demand for transportation in a system that remains dependent on burning fossil fuel. The public health toll of air pollution, especially in large cities, remains high. More than 90% of the world’s population lives in areas that do not meet the air-quality guidelines set by the World Health Organization.

Climate and health impacts are inherently coupled. The bottom line is that a sector almost exclusively dependent on a single energy source, petroleum, operating on infrastructure that represents trillions of dollars of investment, must change substantially in little more than a generation.

Many people have engaged in these problems. Policymakers at all levels of government are working to implement new environmental protections and other measures. The automotive industry is investing in the development and deployment of new technologies. Philanthropies are directing large sums to support climate action. Advocacy and consumer groups are launching campaigns to raise awareness and put pressure on decision-makers. Scientists and academic institutions are conducting research and analyses to support decision-making. 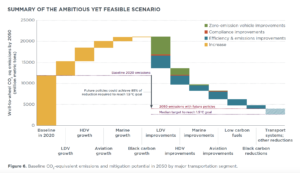 The ICCT “ambitious yet feasible” scenario primarily relies on the successful deployment of four key types of policy:

Check out the webinar organized by the World Economic Forum.