To date, The Climate Group has secured the electrification of more than 2 million vehicles by 2030. The initiative now brings together 31 leading companies. The report covers the commitments of 23 member companies. Together they are switching 145,000 vehicles to electric in 66 markets worldwide by 2030, saving over 6.6 million metric tons CO2e. This is equivalent to the carbon footprint of 1.9 million UK households.

The first EV100 Progress and Insights Annual Report shines a light on companies’ fleet and charging commitments. It identifies climate action as a key driver, alongside the opportunity to be seen as a leader, and a rapidly maturing business case – battery pack costs have fallen by 85% since 2010. The analysis covers the 23 members who joined by fall 2018. Despite identifying barriers such as lack of available vehicles and charging, these companies are switching at speed, sending a clear demand signal to the marketplace. 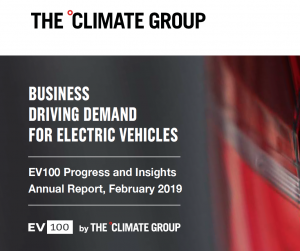 French EV100 member EDF Group will switch more than 31,000 vehicles to electric by 2030, with 27,000 in France alone. Its Plan Mobilité Electrique will also deploy 75,000 charging points and provide access to 250,000 interoperable chargers for its customers by 2022.
Paris City Hall has pledged to phase out all combustion-engine cars from the city by 2030, ten years ahead of France’s national target. Yannick Duport, Director of the Mobility Unit at EDF Group, said: “EV100 is an extraordinary catalyzer of energies towards a clean-transport future. EDF Group managed to introduce EV100 as a key performance indicator to the financial sector: now EDF enjoys a € 4 bn credit line indexed on three indicators of the group’s sustainable development performance, one of which is the achievement of our EV100 targets. Isn’t that extraordinary? The merger of sustainability and finance in action.”

The international logistics company Deutsche Post DHL Group is already seeing 60-70% savings on fuel costs and 60-80% savings on maintenance and repair from its StreetScooter vehicles compared to standard vehicles.

“StreetScooter allows quiet and most of all emission free delivery on the last mile, even in highly polluted agglomeration areas. This issue is drastically gaining importance – and not only in Germany, where municipalities are instructed by court order on a near daily basis to enforce a ban of diesel powered vehicles.

“A significant cutback on logistics-related emissions is an integral part of our group’s strategy. And that means 70 percent reduction by 2025, and zero emissions by 2050. But is that really feasible, given for example the massive growth of the online retail market and the daily rise of parcel volume? Yes it is, by getting a move on in mobility issues, resolutely away from fossil fuel powered vehicles onward to sustainable transport solutions. Using the StreetScooter we will be able to achieve just that with an in-house built, proven electric vehicle.”