Members of the European Parliament have called for standards of ‘direct vision’ – attuned to different truck types – to be proposed by the European Commission when it overhauls vehicle safety rules early next year. Direct vision standards will set out the area surrounding a truck cab the driver must be able to see without using mirrors or cameras, thus improving safety for pedestrians, cyclists and motorists.

Sustainable transport NGO Transport & Environment welcomed the vote by the European Parliament’s to differentiate the direct vision standard by truck class, meaning OEM’s will not be required to have all its fleet conform to one standard via a one-size-fits-all design. But differentiating will mean OEM’s adapt cabs used in urban areas – such as delivery and recycling lorries – more radically than cabs used in construction and long-haul trucks. Where design changes are harder or require more development time, sensor-based active safety systems will have to play a bigger role.

The European Parliament’s report backs a range of new safety measures for cars and vans, as well as new requirements for lorries including direct vision requirements to improve visibility of pedestrians and cyclists, particularly in urban areas. 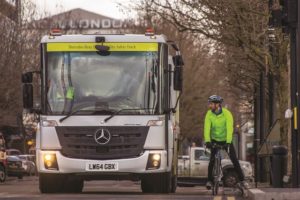 James Nix, freight and climate director at Transport & Environment, said: “It’s hard to believe but today there are no minimum requirements on how much of the road a truck driver must be able to see with his or her own eyes. Consensus is building on the need to have direct-vision standards that are differentiated by truck type. With cities, member states and now also the European Parliament backing direct vision standards, the time has come for the Commission to finally make a proposal to change the vehicle safety rules.”

Members of the European Parliament also demanded safer front-end design standards for heavy-goods vehicles – to enable better vision of pedestrians and cyclists – as well as barriers to avoid collisions and lessen the impact of collisions between road users.

James Nix continued: “Speeding remains one of the main reasons for deadly accidents but it also leads to higher emissions. Intelligent speed assistance (ISA) could play a huge role in improving speed enforcement and cutting emissions. What’s more, intelligent speed assistance will be essential if we are going to allow automated cars on our roads. Europe has an opportunity to be a leader here but that requires the new safety rules to make ISA compulsory for all new vehicles that are sold in Europe.”