The Amsterdam (NL) quay walls: should we stop heavy traffic?

In recent years, several quay walls have collapsed in Amsterdam (NL). The state of the quays is so problematic that an orthodox approach is no longer sufficient. Amsterdam has more than 600 kilometers of public quay wall, of which 200 kilometers are in poor condition. Of those 200 kilometers, 50 kilometers is very bad.

The city of Amsterdam announced that it would increase the speed at which quays are being renewed from 3 kilometers of quay per year to 10 by a long-term collaboration with construction industry partners. Even if the speed of work increases, the city would still be busy for at least another twenty years. 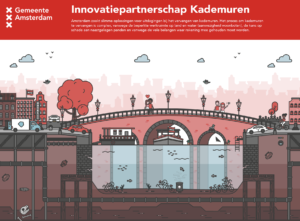 The controlled collapse of a quay wall sounds like a bizarre experiment, but Dirk Jan Peters, a researcher at TU Delft and affiliated with the AMS Institute, talks about conducting such a test. He said to Parool: “We are hopeful that we can do that because we want to know more about what happens in quay walls. It can help us to come up with solutions to tackle the enormous problem facing Amsterdam. ”

Dirk Jan Peters: “You have to get rid of the idea that you have to replace everything rigorously. The city cannot handle that, it takes too long. And you don’t have to. Our research is aimed at determining under which conditions you can still keep many quays. You have to differentiate in your approach: some places you will have to build from scratch, in other places you can come up with smart things to solve the problems. Everything depends on the state of the quay. You can think of alternative technical solutions”.

You have to be smarter, says city logistics professor Walther Ploos van Amstel in Parool. Because keeping all trucks out of the city is an illusion. Walther Ploos van Amstel: “You can forbid some of the freight traffic to enter the city, but stores must be supplied. Refusing one large truck means that that load will be taken over by twelve delivery vans. For some supermarkets that would mean that a hundred delivery vans have to pass by every day. That is not possible.”

The smart solution is that you better discipline and control heavy traffic with intelligent access technology. Walther Ploos van Amstel: “A lot of heavy traffic drives too fast. A 4-ton truck that travels 30 kilometers per hour over a quay, or onto a bridge, smashes everything to pieces. Require transport companies to provide their trip data: the weight of the loaded truck and the speed. These data are registered in the on-board computer. As a municipality, you can then set requirements: you can drive 30 kilometers per hour at that place, in that other street only 11 kilometers per hour. And if they do not comply: issue fines. Enforcement can be done digitally, it is a matter of doing it.”

The continuous pressure on the quays can also be reduced, for example by using a full truck once instead of a moderately filled one three times, says Walther Ploos van Amstel to Parool. “As a municipality, force transport companies to think more about this. They might say: that is difficult, but it is possible. The municipality must set these requirements: the city is in charge of the infrastructure, of the quays. Then you can also determine rules. That makes sense to me.” Vulnerable quays can be spared by using them more sensibly and efficiently, says Walther Ploos van Amstel. “We know what the important routes are for transport: just price them. Heavy traffic drives the city to pieces, at least let them pay for it.”

André van Stigt was the architect for the construction of Hotel MAI last year in the old inner city of Amsterdam. When he was commissioned for the hotel, he decided to deliver the materials needed for this as much as possible across the Amsterdam canals. Twice a week a fully loaded barge crossed the IJ, from Amsterdam Noord to the Geldersekade. The building materials were piled up there as high as possible, for the way back the electrically powered boat was filled with construction waste.

André Van Stigt: “You have to think more carefully about how you organize your work. There was resistance. Builders thought: by boat? How so? We prefer to have our construction materials delivered by truck. Isn’t that how we always do it? I said: this is a vulnerable part of the city, we have to do it differently here. So about the water. It did not happen entirely by itself: the construction company wanted to try it, but also demanded that the construction sum should be increased by 50,000 euro”. André Van Stigt: “I then agreed. I think that amount is manageable on a total of 8 million euros.”

It was quite a voyage of discovery for the construction company, says André Van Stigt in Parool. He had to prepare the entire construction process even more than usual down to the smallest detail. Construction materials had to be delivered to a company in Noord, from where it went by boat to the city center twice a week. “How do you stack your containers, when do you deliver what? That was a puzzle. But that also paid off: work was done much more efficiently, building materials that were not yet needed were not in the way. All in all, I think that you can do construction a month faster with these types of projects. So it is just possible.”

André Van Stigt estimates that 85 to 90 percent of the construction materials were transported by water. “Sometimes you cannot avoid using the road when elements are too large to pass under the bridge. And we had to install a crane in the courtyard to hoist the materials from the barge in. By the way, we supplied them via the Zeedijk, not over the quay itself. My impression: this gave peace of mind and significantly less nuisance in the neighborhood. And we have spared the quay walls.”

There is an important role for the municipality, says Walther Ploos van Amstel. “Half of the total weight of building materials that pass through the city belongs to the municipality itself. Concrete, brick, sand. The city itself will have to take the lead. And also look at the waste collection trucks, they are an important part of the problem.”

André Van Stigt sees a lot in the disposal of waste over the water. “Small, lightweight garbage trucks that lift garbage into special barges. Then you are rid of those heavy cars. Successful tests have also been done with it. And: also take a look at the disposal of industrial waste: every entrepreneur concludes its own contract for the collection of waste. The result is that in small streets sometimes four garbage trucks pass one after the other. Amsterdam can only save the quays if we start to think fundamentally differently and we actually organize ourselves differently.”

Amsterdam is not the only Dutch city that has to contend with sinking and neglected quays. Earlier this year, Utrecht announced that the repair of the quay walls there would be more expensive than the restoration of the Dom Tower and more complicated than the problematic construction of the Uithoflijn. The condition of the quay walls is also a subject in The Hague: The Hague has already announced that more than 20 kilometers will have to be replaced in the coming years. Every year, 1 kilometer of quay is tackled. The work will take at least until 2040.

Internationally, the situation in Venice is striking. The city is slowly sinking into the water of the lagoon. This has to do with the rising sea level and the very unstable subsurface. The foundations of the quays have also been seriously damaged over time because groundwater has been pumped away for decades. Another factor is the intensive use of the canals in and around the city, the water level fluctuates strongly. It is said that the water level in the Grand Canal sometimes rises half a meter when a cruise ship docks nearby.