With construction having started in the spring, the Paris multimodal logistics centre will be opening its doors soon. Fleet Street reports about it: We used to think that they were unwelcome in town centres, driven once and for all into more or less distant suburbs: however, logistics facilities are making their come back in the very heart of cities, as in Paris, where a gigantic centre will be opening its doors in a year’s time. As Paris wishes to limit the number of heavy trucks in the city, it has created a multimodal logistics centre.
Goods will be brought here by rail from an upstream base to the north of of the Paris region. The goods will then be distributed by electric or hybrid vehicles. This “front door for logistics in the city”, according to the Mayoress of Paris, Anne Hidalgo, will occupy 45,000 m² spread across three levels. 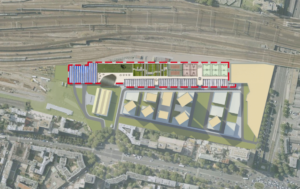 Located in the 18th Arrondissement, in the north of Paris, the centre, construction of which began in the spring, will be commissioned in September 2017 and will cost 58 million euros. It is being funded by two private banks, CIC and Caisse d’Épargne, as well as by the French Bank for Public Investment.