An ambitious project by Alphabet subsidiary Sidewalk Labs could reshape how we live, work, and play in urban neighborhoods. Toronto’s waterfront, where the eastern part of the city meets Lake Ontario, is a patchwork of cement and dirt. Torontonians describe the site as blighted, underutilized, and contaminated.

Alphabet’s Sidewalk Labs wants to transform it into one of the world’s most innovative city neighborhoods. It will be a place where driverless shuttle buses replace private cars, traffic lights track the flow of pedestrians, bicyclists, and vehicles, robots transport mail and garbage via underground tunnels, and modular buildings can be expanded to accommodate growing companies and families.
Sidewalk Labs proposes transporting garbage in underground tunnels to reduce street traffic and greenhouse-gas emissions. Robots would sort and haul the waste and could also deliver mail and packages. 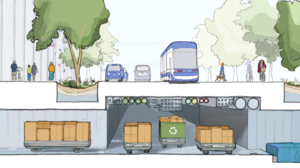 At the core of a future city is a layer of digital infrastructure that provides ubiquitous connectivity for all, offers new insights on the urban environment, and encourages creation and collaboration to address local challenges. Sidewalk Labs has some skepticism to overcome. But if it can demonstrate that intense data-gathering really does enhance urban living, it could provide a model for smart cities around the world.

Read more about the Toronto project on Technology Review.