Cities using, or planning to use, the Euro 6 standard as the basis for their low-emission zones (LEZs) will not deliver the air quality improvements they expect, AIR (Allow Independent Road-Testing) has warned. Euro 6 (or Euro VI for trucks) is the European benchmark standard for vehicle emissions, while vehicles that meet the standard receive unrestricted access to LEZs.

AIR sounded the alarm after the UK’s Driver and Vehicles Standards Agency (DVSA) published a report which found that some cars of Euro 6 standard produce up to 20 times the emissions limit for nitrogen oxides (NOx) in laboratory tests. Also, light commercial vehicles don’t perform well. They tested three trucks in this program and found all of these to be compliant with the legislative limit. AIR said that independent, road-based vehicle emissions tests would be better at tackling ‘dirty’ Euro 6 vehicles. 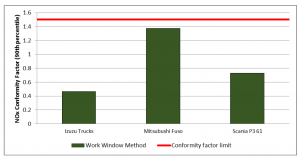 Nick Molden, co-founder of the AIR Index, said, ‘Cities who in good faith are using or plan to use Euro 6 as the threshold for access policies will not deliver the air quality improvements expected and will not solve their breach of urban air quality in the time required. ‘DVSA’s latest test results confirm the importance of independent testing to provide confidence and transparency about actual emissions during on-road driving. It highlights again that not all Euro 6 cars control NOx emissions to the same degree.’