Air quality in Europe is improving

Better air quality has led to a significant reduction of premature deaths over the past decade in Europe. However, the European Environment Agency’s (EEA) latest official data show that almost all Europeans still suffer from air pollution, leading to about 400,000 premature deaths across the European continent.

The EEA report notes that there remains a gap between the EU’s legal air quality limits and WHO guidelines, an issue that the European Commission seeks to address with a revision of the EU standards under the Zero Pollution Action Plan.

The measures implemented at the national level have addressed the whole set of emissions sectors, for example:

EU, national and local policies and emission cuts in key sectors have improved air quality across Europe, the EEA report shows. Since 2000, emissions of key air pollutants, including nitrogen oxides (NOx), from transport have declined significantly, despite growing mobility demand and the associated increase in the sector’s greenhouse gas emissions. Pollutant emissions from energy supply have also seen major reductions while progress in reducing emissions from buildings and agriculture has been slow. 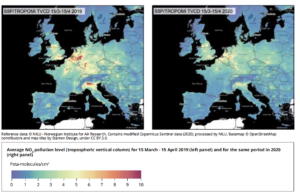