Amsterdam will stop its pilot with 8 City Trees to improve air quality. It was stated that in the current set of City Trees will not have a significant impact (defined as a 10-20% decrease) of the concentrations of particulate matter and nitrogen dioxide on the facades of houses in the Amsterdam Valkenburgerstraat.

This was concluded by TNO based on a model that was developed to simulate emission of the pollutants and their dispersion in the street combined with detailed descriptions of the working principle of the City Trees. In none of the calculations, the positive effect of the City Trees was larger than 1% on average for PM10. For NO2 the effect of the City Trees on annual averages was not beneficial. The concentrations of NO2 on the facades increased by up to 0.5% at the ground floor.

The calculations were carried out for a representative series of wind directions and wind speeds and state of the art information on emissions and vehicle velocity. By doing so the calculations were considered to be carried out under realistic conditions. The concentrations calculated in the Valkenburgerstraat compared quite well with concentrations measured in other streets in Amsterdam with dense traffic. 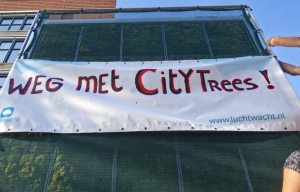