Cabs and curb allocation: can we learn lessons for city logistics?

Like all major cities, Seattle is grappling with how best to manage curb use, mobility, safety and congestion associated with the increasing use of ride-hailing services. Ride-hail like Uber and Lyft in the Seattle region has grown to more than five times the level it was at the beginning of 2015, providing, on average, more than 91,000 rides a day in 2018 with the majority of trips concentrated heavily in the city’s densest neighborhoods. 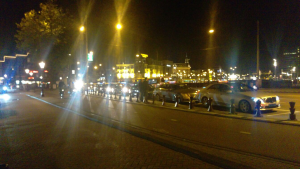 The Urban Freight Lab collaborated with the Sustainable Transportation Lab and the Seattle Department of Transportation (SDOT) to design a data-driven research methodology that combined video analytics, ground observations, user surveys, and existing city data to assess a new approach to curbside management in a congested urban environment. SDOT installed additional passenger load zones and coordinated with the service providers to institute a geofence in the area.

The results of this study might be relevant for developing ‘intelligent access’ technology, smart (digital) enforcement and geo-fencing for city logistics delivery vans unloading goods to discourage double-parking and reduce traffic conflicts.