ICCT study: the health impact of air pollution by traffic in cities

Exhaust from vehicles is a major source of air pollution worldwide. A by the ICCT study links state-of-the-art vehicle emissions, air pollution, and epidemiological models to estimate the impacts of transportation sector emissions on ambient PM and ozone and associated health impacts in 2010 and 2015.

The study provides a detailed picture of the global, regional, and local health impacts attributable to emissions from four transportation subsectors: on-road diesel vehicles, other on-road vehicles, shipping, and non-road mobile engines such as agricultural and construction equipment.

Despite the recent adoption of more stringent vehicle emission regulations in some major vehicle markets, the transportation sector remains a major contributor to the air pollution disease burden globally. This points to the need for reducing emissions from the transportation sector to be a central element of national and local management plans aimed at reducing ambient air pollution and its burden on public health. Wherever world-class vehicle emissions standards have not yet been adopted, countries and trade blocs should avoid the continuation of the considerable public health damages highlighted in this report by accelerating their adoption. 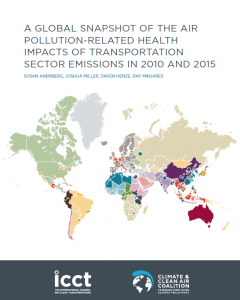 The experiences of the top vehicle markets underscore the substantial time lag between implementation of new vehicle standards and the realization of their full benefits for the in-use vehicle fleet that results from the long lifetimes of vehicles and equipment. Countries and trade blocs that already have adopted world-class vehicle emission standards should consider accelerating the expected public health benefits with strategies to reduce emissions from in-use vehicles, such as low emission zones, retrofit/replacement/scrappage programs, and targeted fleet renewal.
Urban areas and subnational jurisdictions can justify more ambitious actions because of their disproportionate exposure to transportation emissions.