Last-minute rerouting, guaranteed deliveries within two-hour windows, drop-offs in places without street addresses. Parcel delivery companies have been talking about all of this for years. That this future has now arrived is no surprise. The million dollar question is who is leading the way… BCG took a close look.

New kids on the block

Startups and giant e-tailers, seizing the opportunity created by digital technologies and the rise of e-commerce, are innovating in ways that are upending the industry. These newcomers are concentrating their services in the areas where profit pools are the deepest and offering alternatives to products for which incumbents still charge a premium.
As new ways of achieving scale have emerged, the incumbents’ asset-heavy networks are losing relevance. In many cases, those networks and the legacy systems that underlie them are slowing incumbents’ embrace of new realities.

When the e-commerce boom began, little venture capital money was invested in parcel and express, a seemingly stable business with high barriers to entry. That has changed in the last few years. More than $6 billion has poured into the parcel and express sector since 2012.
Investments as a whole increased some 20-fold and late-stage funding increased more than 30-fold from 2014 through 2016. Ten startups have received more than $175 million in cumulative funding, and ten others have received more than $50 million. A new development that incumbents need to start tracking is all the logistics company formation that’s happening in Asia. Most of the funding has gone into just six companies: Cainiao, Best Logistics, New Dada, Hive Box, Yimidida, and Yunniao Logistics.

In a new report—a follow-up to How a Digital Storm Will Disrupt the Parcel and Express Industry BCG takes a detailed look at startups’ assault on existing business models. BCG’s first report discussed five trends that have reshaped the industry. A next BCG report will focus on what incumbents need to do to add the necessary in-house digital muscle.

In analyzing the startups’ business models, two conclusions stand out.
First, only a small amount of the funds has gone to companies that actually support traditional deliverers; the overwhelming majority of the funding (about 95%) has gone to companies that disrupt them.
Second, these disruptors have pretty much all set out to drive a wedge either between incumbents and senders or between incumbents and receivers. To the extent that these newcomers succeed, the profit pools will shift in their direction, and incumbents will be left as suppliers of commoditized services. 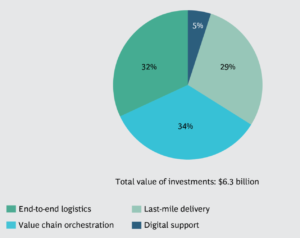 In interviews done for the BCG study, parcel and express companies made it clear that they consider e-tailers (such as Amazon in the US and Alibaba and JD.com in China) to be their biggest threat. When they build their own parcel delivery capabilities, e-tailers often say that they are doing so because they are concerned that incumbent deliverers won’t be able to meet their customers’ expectations.

Reliability and speed of delivery, even during peak shipping seasons, have become nonnegotiable matters in the minds of most online shoppers. So has flexibility: most online shoppers want the option of either next- or same-day delivery, have come to expect notification and track-and-trace services, and are starting to look for rerouting options. In cases where traditional deliverers can’t offer these benefits, it makes sense for e-tailers to offer the benefits themselves, according to BCG.

New players, with new technology solutions, are entering the logistics space with each month that passes. The real focus for incumbents should be on staying ahead of the changes in their markets and on avoiding disruption and commoditization. It’s all about being the first to anticipate what customers will need. To the extent that incumbents can do this, they won’t be the ones playing catch up.