The growth of e-commerce has helped spur development in the logistics sector for warehousing, sorting, transporting and delivering goods. But urban areas present unique challenges in that regard, and many logistics companies are worried how that plays into business growth and sustainability, according to a recent UPS and GreenBiz survey.

The 612 businesses that responded to the UPS-GreenBiz survey mentioned traffic congestion and air pollution as their top two concerns about operating in urban environments.

Few cities have sustainable urban freight plans. The majority of the UPS-GreenBiz survey respondents, 72%, reported a desire to work closely with city officials to address urban operating challenges. Businesses sited insufficient collaboration across sectors as the biggest barrier to more efficient and sustainable urban logistics, closely followed by a lack of critical infrastructure.

The study suggests that all parties benefit from involving multiple stakeholders from the public and private sectors in municipal decision-making. Failing to do so could cause a well-meaning municipal solution to have detrimental effects on the private sector. 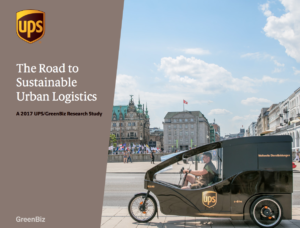 The challenges of increased pollution and congestion are being compounded by the rise in business-to-consumer or e-commerce. MIT’s Winkenbach notes, “Urbanization often goes hand-in-hand with an increase in the average affluence of a city. Urban customers tend to order more online and those goods are shipped to him or her directly rather than being picked up at a retail store. This rising affluence also comes along with a rising expectation with regards to service level.”

This creates a conflict as logistics operations become more complex, costly and diffcult
to control. Meanwhile customers demand faster, more reliable and more flexible delivery options. The rise in e-commerce transactions is creating an increase in the volume of packages to be delivered which, if not supported by sustainable logistics practices, could result in even more vehicles on the road and an increase in congestion and emissions.

It is clear that there are major barriers to providing more sustainable and effcient urban logistics, with 65 percent of businesses responding to our survey highlighting insufficient collaboration across sectors, and 64 percent citing a lack of critical infrastructure. While these issues rose to the top, lack of investment, leadership accountability and governance were also identified as major challenges to overcome.

If these barriers are not addressed and if cities cannot improve management, then businesses and residents will su er. When asked to identify issues impacting their organizations as a result of increases in urban populations and the way cities are being managed, nearly a third of all respondents noted some impact associated with delivering goods in an urban environment.

In addition to having a wide variety of approaches, such as congestion pricing or vehicle size restrictions, many cities have different visions of what they want to become. As UPS’s Harris notes, “City organizations like C40 [and others can have a certain degree of effectiveness when it comes to harmonization, but we are never going to take away the desire of a mayor to want to be able to be different from the last mayor.” City officials are also seeking to differentiate their cities from others in order to drive preference among businesses and residents, who provide the revenue base that helps cities thrive. To avoid making decisions or passing laws that result in unintended consequences, city offcials will need to collaborate with logistics providers to address these challenges.