In this report commissioned by the Dutch Ministry of Economic Affairs, WIK has reviewed the current situation and outlined expected trends and developments in the Dutch postal market for the next ten years.

The study assesses the impact of market trends on the future sustainability of postal networks and universal postal service.

The Dutch market for domestic letter services has been continuously declining year on year. Since 2010, domestic letter volume has declined by nearly one third to 3.1 billion items and revenues by more than one fifth to 1.3 billion Euros. Between 2010 and 2015 domestic letter volume declined by 7.6% per annum. Business letters account for 93% and consumer letters for 7% of total volume. Time-critical letters (“24 hours”) have declined more than non-time-critical letters (“48+ hours”). The relation between time- critical and non-time-critical delivery of domestic business letters has been shifting from around 40/60 in 2010 to one third/two thirds in 2015.

The future demand for postal services is mainly driven by the “megatrend” digitisation. Digitisation and digital readiness are extraordinarily high in the Netherlands compared to many other European countries. Today’s total domestic letter volume is expected to decline by around 30-35% until 2020 and by around 45-55% until 2025. The basic development to digital communication is irreversible, but the speed of decline depends on the dynamics in the Dutch postal market. While letter volume will further decline, there are clear prospects for growth in packages and parcels (including universal service parcels) as a result of dynamic growth in e-commerce. 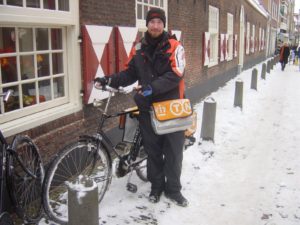 There is a high risk that universal service tariffs will further increase because volume declines. Postage for universal services is regulated by a complex formula that relates the headroom for tariff increases to the development of average fixed costs (among other things). Volume decline of time-critical letters would raise average fixed costs and therefore facilitates additional tariff increases.

Dutch postal legislation is guided by two main objectives: (1) To ensure an affordable and sustainable universal postal service and (2) to ensure a sustainable competitive postal market.

This study assessed a variety of detailed policy options and their appropriateness in the scenarios “Back to monopoly” and “Converging networks”. Based on the impact analysis of potential policy options, for each scenario, the study recommends appropriate responses from Dutch postal policy.

The scenario “Converging networks” requires a balanced approach to ensuring universal postal service by relying on market powers. This approach puts emphasis on competition and trust in commercial solutions to meet the challenges of a shrinking postal market.

Impose basic access products for rest mail. As long as local and regional competitors do not have nationwide coverage, they need access to an existing postal network for their “rest mail”, i.e. for the mail which they collect from their customers but that is directed to areas/addresses that they do not deliver to. Imposing access products in time-critical delivery should be the measure of last resort, i.e. such obligations should be imposed only after negotiations between the market dominant operator and competitors have failed. For this purpose, the existing legal instrument of access regulation (Article 13a-k) of the Postal Law (Postwet) should be kept as a possibility, but should be implemented by ACM with great care in practice.

Enforced action against possible predatory pricing, fidelity rebates and tying. To support the transition to “Converging networks”, strict enforcement of competition law standards appears necessary as long as PostNL continues to be dominant. To prevent anticompetitive pricing strategies, ACM should be informed about individual contracts and the pricing behaviour of the market dominant postal operator on a regular base.

“Back to monopoly”: Ensure universal postal services in the Digital World

Even in the “Digital World” universal postal service will still play a role for secure and reliable communication between all households, individuals, businesses, and government offices. This scenario for future postal policy gives emphasis to ensuring these services for the general public in light of changing postal users’ needs and technological progress.

Keep PostNL as designated USP in the Dutch letter market. In the scenario “Back to monopoly”, PostNL will be the only surviving postal operator in the Dutch letter market. Keeping PostNL as the designated universal service provider will be the most appropriate instrument to replace missing market incentives, particularly for most vulnerable postal users, notably consumers. For the increasingly competitive Dutch parcel market, however, WIK recommends not designating PostNL (or anybody) for the provision of parcel services but to rely on market forces.