McKinsey: Urban commercial transport and the future of mobility

Commercial traffic clogs city streets, contributes to pollution, and drives up the cost of doing business. But there are many ways to do better. Last year, McKinsey and Bloomberg New Energy Finance published An integrated perspective on the future of mobility, which outlined four trends that are rapidly changing passenger transport: electrification, autonomy, connectivity, and sharing.

The same four trends will, to a large degree, shape the future of commercial urban transport, which is the focus of a new McKinsey report. Commercial vehicles contribute disproportionately to urban pollution and congestion. They are more apt to idle, make stops and starts, and block traffic. In general, they generate higher nitrogen-oxide and other emissions.

There will likely be many more commercial vehicles on the road, given economic growth and the expansion of e-commerce. Different solutions are emerging that could relieve the pressure. McKinsey examined six of these in detail, and consider how they can work in three kinds of urban areas: dense, developed cities like London and Tokyo; sprawling, developed cities like Los Angeles and Sydney; and dense, developing cities like Beijing and Mexico City.

Autonomous commercial vehicles, for example, will likely be most attractive at first in places with high labor costs. Drones will work better in sprawling cities where there is ample space to land. Electric vehicles (EVs) can and eventually will work everywhere.

To improve urban commercial transport, McKinsey identified solutions all along the delivery value chain. They evaluated each one for its financial value, social value, and feasibility. Of all the solutions McKinsey studied, two stand out: Urban consolidation centers (UCCs) and night deliveries shift traffic to off-peak hours. 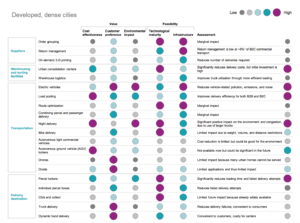 A number of other solutions, such as order grouping, route optimization, and night deliveries, could be implemented more or less immediately. Others, such as the use of droids, robots, and autonomous ground vehicles (AGVs), are realistic, but likely years away from large-scale deployment.