Scania’s new battery electric self-driving urban concept vehicle is designed with the flexibility to shift from ferrying commuters to and from work in mornings and evenings, delivering goods during the day and collecting refuse at night. Scania’s engineers have taken the modular system to the next level in developing a concept vehicle that can change shape for varying urban assignments.

“NXT is a vision of the future for transport in cities. Several of these technologies have yet to fully mature but for us it’s been important to actually build a concept vehicle to visibly and technically demonstrate ideas of what is within reach,” says Scania’s President and CEO Henrik Henriksson. “NXT is designed for 2030 and beyond while incorporating several cutting-edge features that are already available.” 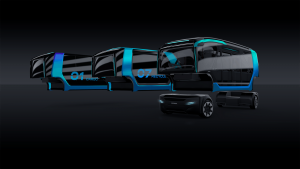 Commercial transport constitutes the pulse of a city. It is how we get to work or school. It is how food reaches shops and restaurants, how medicines are delivered to hospitals and how refuse is collected and removed. Currently, flows in cities are far from being optimized as goods are delivered during the morning rush hour while most people are also on the move. Meanwhile, commercial transport is largely barred from city centers during nights when people are asleep.
Henriksson: “We at Scania can’t redraw the entire transport system for cities. What we can do is inspire change and that is the idea behind NXT – to think about transport and vehicles in a different and sustainable way.”