A ban on large truck in cities? Don’t do it!

Now that GreenLeft parties haven become the dominant political party in many large Dutch cities, the coalition governments running those cities have made city logistics a priority. City logistics is supposed to take up less public space, use clean electric vehicles, reduce noise, free up sidewalks for pedestrians, cause less damage and – most of all – be a lot safer. Those are all reasonable demands.

Some Dutch cities are drawing up plans to ban heavy goods vehicles. That would be a bad idea. Those trucks account for 20 percent of the freight traffic in cities. But they also account for more than 80 percent of the total weight and volume of the goods being transported. They are filled to the brim with trash or with supplies for hotels, restaurants, cafés, shops and construction sites.

Even just replacing the more than 800 fully loaded heavy goods vehicles that supply supermarkets, restaurants and cafés each day in a city like Amsterdam (NL) would demand some 8,000 extra delivery vehicles and 15,000 extra drivers. And that’s just for food products.In construction logistics and waste collection the problems are even bigger. But aside from the acute shortage of drivers, and the lack of space for transhipment points in the surrounding areas, this would also lead to more traffic injuries.

Our daily grocery shopping, the beer we enjoy at bars, and the construction of homes are all becoming 4 to 5 percent more expensive. Cities are becoming unaffordable to live in. Which measures would it make sense to take?

Damage to the infrastructure

heavy goods vehicles obviously shouldn’t damage the vulnerable infrastructure. Old city centers weren’t built for those monsters. A smart monitoring of the infrastructure will enable planners to determine preferential routes (including by water) that are less susceptible to damage. But if municipalities really want to tackle city logistics, they will have to aim at reducing the number of vehicles. A ban on large trucks should only be considered as a last resort.

What is really needed is bundling. Most delivery vans entering cities carry just one or two items. Eighty percent of the delivery traffic consists of vehicles belonging to individual suppliers, while only 20 percent of deliveries are outsourced to professional logistics service providers. The latter firms transport an average of four times as many items in their vans compared to the companies that make their own deliveries. In short, the specialists bundle their deliveries. When it comes to city logistics, the government needs to promote as great a role as possible for specialized firms. Being launch customers themselves, municipalities ought to set a good example by bundling their own purchasing volumes and by imposing stricter requirements for construction logistics in that regard. They have a pilot role to play for the private sector.

Municipalities need to start sharing traffic data with freight carriers. That would allow trucks to choose the smartest and safest routes with the least chance of causing damage. Smart links to traffic data would enable carriers to use unloading zones more efficiently. Surveillance cameras would allow a better enforcement of parking regulations in loading and unloading zones. Having direct contact with individual freight vehicles would enable the government to say who is and who is not allowed to enter a street. 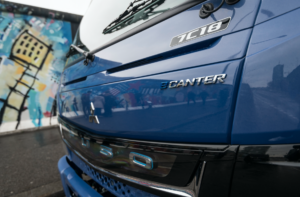 It’s time to make zero emission electric transport mandatory – although hydrogen-powered vehicles are also acceptable. While we already have the technology, it is rarely used since it doesn’t yet seem to be economically viable. That would soon change if electric and hydrogen-powered transport had a monopoly in the cities. In some cases, small deliveries can best be delivered by light electric vans and cargo bikes. And for waste and construction materials, transport via water is sometimes the best option.

Accidents are more apt to involve freight traffic than private cars. The government needs to prohibit unsafe trucks with a blind spot from entering cities. There are plenty of trucks for sale that don’t have a blind spot. As from 2020, any trucks entering London will need to have direct vision.

The government should design new districts based on zero-impact mobility guidelines: clean air, plenty of greenery and lots of room to move around in. Smart and clean city logistics should be enabled from the start in those new districts.

While city logistics might not exactly increase livability, it is still one of the conditions for an attractive city.  A ban on heavy goods vehicles would only lead to more of a mess. Don’t do it! Other measures will really be more effective.