The UK has taken a next step in developing autonomous last-mile mobility with the launch of a driverless shuttle trial in an urban environment. Gateway Project (Greenwich Automated Transport Environment) researchers want to learn how the prototype pod reacts alongside people in a natural environment.

Following the passenger-focused trial, the project will explore the potential for driverless pods to carry last-mile urban deliveries. 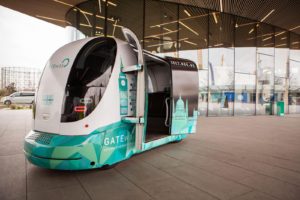 The shuttle will navigate a two-kilometre route around the Greenwich Peninsula, using sensors and autonomy software to detect and avoid obstacles. The Gateway Project is a research programme led by Transport Research Labortatory (TRL) and funded by government and industry.
Source: http://freightinthecity.com/2017/04/last-mile-autonomous-shuttle-goes-trial-urban-environment/#zUts8OY9STFRZ8IL.99