London: how to stop the construction industry choking our cities?

Poor air quality is now thought to be the cause of 40,000 deaths in the UK each year. But while cars and lorries have attracted most attention, less reported is the contribution of other polluters to the problem, particularly construction sites. According to the London Atmospheric Emissions Inventory construction sites are responsible for 7.5% of damaging NOx emissions, 8% of large particle emissions PM10 and 14.5% of emissions of the most dangerous fine particles PM2.5. The vast majority comes from the thousands of diesel diggers, generators and other machines operating on construction sites.

The Guardian reports about it:

In January 2017, London Mayor Sadiq Khan said he intends to bring in a fine like the congestion charge to be paid by firms using polluting machines, beefing up groundbreaking emissions rules on central London building sites. Leading the charge are firms like Off Grid Energy, which has developed products that turn traditional diesel generators (responsible for an estimated 25% of site emissions) into hybrid machines, reducing fuel consumption by around 60%. 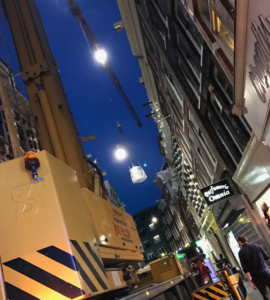 Daniel Marsh, King’s College London academic and project manager for the London Low Emission Construction Partnership is particularly concerned about the impact on those working with the most polluting machines. He says: “Now on a construction site if you find asbestos it’s like a scene from ET, people swoop down in protective suits – it has become a huge priority. What the industry has failed to take on board is that diesel emissions should be considered in the same way.”

Read the full article on the Guardian.