A TU Delft student wrote a thesis exploring how reinterpretate and revitalise underused areas in the modernist urban fabric of Rotterdam. Since Rotterdam was bombed during the Second World War, a whole new modernist city could arise. The Reconstruction plan can still be seen as a manifesto of modern architecture and urbanism.

Main focal points were the separation of functions, space for traffic and the suppression of residential functions. The organization of traffic and the aim of separation of functions are in shaping the plan, with main traffic routes, pedestrian shopping streets, mixed traffic/shopping streets and expedition courtyards and streets. The main traffic routes were executed as boulevards, with separate traffic lanes and wide sidewalks. 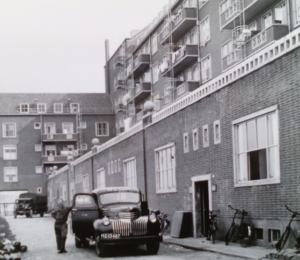 In the Reconstruction plan of 1946, the concept of expedition courtyards have been translated in a purely functional manner. The plan is clearly hierarchically set up with main streets, an alley and an expedition street accessible through an entrance gate.

The inner city of Rotterdam is on a turning point of becoming a more residential place. Converting underused spaces into defined places. Shaping the public space can be conceived as an important contrast between the traditional European city and the modern city.

In the traditional city, the facades of the buildings define the boundaries of the public space and thus become a series of cavities in the urban fabric. While the public space in the modern city becomes an open space with detached objects, modernist buildings. This design proposes a structure in which the public, semi-public, collective and private spaces are shaped. This structure is related to the surrounding modernist building and creates various places with different degrees of publicness.

At the moment this space is underused and not attractive. You could call it a no man’s land since there is no (main) use. Due to the many different property owners, making a strategy for these spaces is a challenge.

The hypothesis is formulated that a sustainable reinvention is a critical revision of the architectural typology confronted with contemporary programmes and conditions. This approach guarantees the architectural and urban identity will live through. This design speculates on the future of the Rotterdam expedition building block. The design proposal engages in a retroactive densification of the inner city. A typological study of the expedition streets as urban artefacts has been made.