McKinsey about on line groceries: get big or get out!

In the United States and Western Europe, many traditional grocery retailers are seeing their sales and margins fall. And, things could get even worse. McKinsey presents a vision on how to reverse the trend and presents six imperatives for change. The last mile in online groceries being one of them.

McKinsey: “In online grocery, delivery costs are the biggest hurdle to profitability. It’s a hurdle that can be overcome only with major investments in advanced analytics, warehouse relocation, and automation. If a grocer isn’t willing to go big in e-commerce, it might as well get out”.

Solutions for the last mile

Another potential solution is pooled deliveries, which would require grocers to collaborate with their competitors or with other businesses: for example, one player or a third-party logistics provider could combine several retailers’ deliveries. 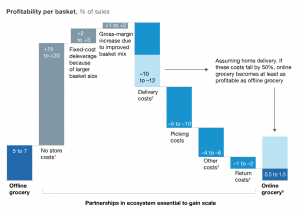 In China, about 50 companies have been piloting an app that mobilizes an on-demand pool of thousands of independent drivers to deliver goods. The app contains profiles and user ratings of drivers, and it indicates whether they’re available and willing to help unpack items. To aid drivers as they navigate neighborhoods, the app offers detailed trip planners and route maps. Early trials have indicated that this approach could reduce 30 percent off retailers’ delivery costs, according to McKinsey.

Another solution is to store the goods closer to where people live. According to McKinsey’s analysis, if a large retailer relocates half of its distribution centers closer to city centers from, say, 100 kilometers away to only 10 kilometers away it could reduce delivery costs by about 10 percent.